A WILD AND CRAZY PLACE!


Craziness at an animation studio went beyond what the public would see!


Of course there were gags galore on screen. It’s said that Dave Fleischer, who would oversee Fleischer Studios film production, wanted a gag in EVERY scene. According to animator Shamus Culhane: “Dave was a gagman with a flamboyant disregard for story structure and character motivation. His motto was a gag in every foot, and he would cram one into a scene regardless of the fact that it had very little or no connection with the story line…”

New staff hires were ‘tested.’ A typical new staffer was given a bucket and directed to a room to fill the bucket with ‘film sprockets.’ Or they would be sent into a dark room with a female employee –who would close the door and a few minutes later run out screaming!

In 1938 Fleischer Studios re-located to Florida where flies would abound. When the windows were open staff would catch these flying invaders, one by one, and glue tiny paper airplane wings to their backs--- after which they’d be surrounded overhead by these tiny buzzing airplanes.


That’s my mom, Ruth (Fleischer) Kneitel--- born December 28, 1906 in Brooklyn, New York. It’s always amazed me that when she was growing up women in the United States did not have the right to vote. That wouldn’t happen until 1920, when she was 19 years old.

Since this is the month of her birthday I thought I’d share some of the interesting things about my mother’s life in animation. She was the daughter of an important animation pioneer, and in 1931 she married an animator! She even worked in early animation…


At the time Ruth was born, her father Max had not yet begun his work in animation. (To learn more about Max Fleischer’s amazing career read Out of the Inkwell by his son, Richard Fleischer). Max had a vision that he could improve on the existing crude animation of the day.

In 1915, when Ruth was nine years old, Max patented the Rotoscope… an invention that created more fluid movement of animated characters. Working together with his brothers, Max created the very first films using that Rotoscope. This event marked the beginning of his career in animation. Since Max had meager funds, he routinely used family in these early films…. aunts, uncles, kids… including Ruth and her younger brother Dick. From these modest beginnings the Fleischers became one of the many immigrant success stories.

On the way to that success my mom didn’t miss an opportunity to be involved.

It was natural that Ruth, a fun loving gal, would want to be part of this exciting theatrical life. Trained as a dancer, by her late teens she was dancing on stage in vaudeville chorus lines. In 1925 Max even created a film, Ko-Ko Steps Out, that was built around Ruth and her dancing. In the film, Max is on screen while Ruth appears first on the screen with Max and then appears to jump from the screen to the stage where they interact. It was a combination of film and vaudeville! Here’s a newspaper review that tells a bit of the story. (Red Seal was a film company Max started in 1923 that produced live action comedies as well as animated films.) BTW- I’ve never found a copy of this film.
At the Studio, any event of note was worth a hand drawn cartoon—here’s one (below) they gave to my mother when she was appearing live with Ko-Ko Steps Out at a Rialto Theater in New Jersey.
The reverse of this publicity photo from about 1924 reads: “Max Fleischer and a group of the prettiest chorus girls in New York, all of whom are engaged for his new series of two reel comedies, Carrie of the Chorus.” Ruth can be seen in this photo- she's wearing a coat and hat, and talking to Max. In this Carrie film Ruth plays the part of Carrie’s best friend.


Ruth met Ray Bolger when they were both dancing on the same bill at the Paramount Theater. Bolger (later to become famous as the scarecrow in the Wizard of Oz) became a close friend and occasionally Ruth’s on stage dancing partner. Bolger earned his very first film credit when he appeared in this Carrie of the Chorus film.


The two photos above are from another of Max’s Red Seal films, Morning Judge, that was released in 1926. Ruth is on the left side of the first photo. In the second photo Ruth is in the middle, standing in front. I’ve never found a copy of this and have no idea of what is going on in this film!
By 1926, when Max’s Red Seal venture was floundering, Ruth joined the Ned Rayburn traveling dance troupe as a chorus girl. Ned Rayburn was famous at the time for producing dancing stars. In the photo above Ruth is standing in the back row third from the left. When appearing on stage she sometimes used the name Ruth Dix…likely a play on the name of her younger brother Dick, who she adored. The Rayburn troupe danced in theaters all over the U.S. Ruth would have been about 20 years old at the time, and her parents, Max and Essie, were not at all happy to have her leading what they considered a wild and questionable life.

Just how racy life was on the road is reflected in the 1927 telegram (above) from Ned Rayburn to Ruth.


When Ruth returned home from a Wayburn road tour her mother made it clear that she was NOT to go on the road anymore! But Ruth had no interest in sitting idly home, so she proposed that she’d consider staying only if she could work at Max’s Studio. Max reluctantly agreed….reluctant because he knew the Studio had a staff of basically crazy, wild people, and he worried Ruth might contribute too much to that craziness.

Much to Max’s surprise and delight, Ruth became a valuable asset. She worked her way up first to Head of the Opaquing (or painting) department and later she became Head of the Inking Department. She also wrote stories for a number of cartoons. Aside from her success in the office, she was still a girl that loved to party, so she was equally popular with the fun-loving staff.

The studio is where my parents met, my dad was an animator at the time. They were an unlikely pair since Ruth loved to dance and Seymour couldn’t dance at all. But he was such a nice guy. Ruth at first thought he had a sweetheart since she’d hear him on the phone saying.. ‘hello dear’… I’ll be home soon dear.’ Turned out he was talking to his mother! My dad was in his late teens when his father died, at which point he became the main support of his mother and sister. Animator Shamus Culhane wrote…"the marriage made no difference in Seymour’s status in the studio. He was never given, nor did he ever ask for, special handling from the management."
My mom and dad married in December of 1931. Ruth continued to work at the studio until late 1932 while awaiting the birth of their first child, Tommy.  Two more children followed, myself in 1936 and Ken in 1941. In the photo above (circa 1945) we're all together in one of those fake photo set-ups.

Although Ruth became a stay-at-home mom, she continued to write stories for cartoons and comic books, many of which were used! After my dad died in 1964 she became more active in the animation industry, working to promote a novel 3D process… but that’s another story!


Halloween is almost here… a good reason to visit again with Casper!

This first story idea is by Izzy Klein, a member of the story department at Famous Studios. I’ve read that later he was an early cartoonist for the New Yorker as well as an animator for Disney. 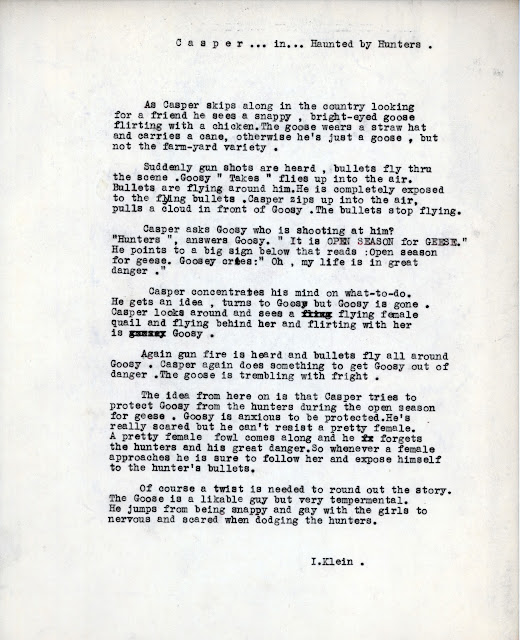 This next ‘story idea’ is by ‘Tex’ Henson. ‘Tex’ had actually started out working for Disney and later moved to Famous Studios, in New York, where he worked on Casper films. He had a long career in animation with many distinctions having worked on films as diverse as Song of the South, Peter and the Wolf, and the Bullwinkle Show. He’s also credited with naming the characters Chip ‘n’ Dale, as well as teaching animation in Texas. 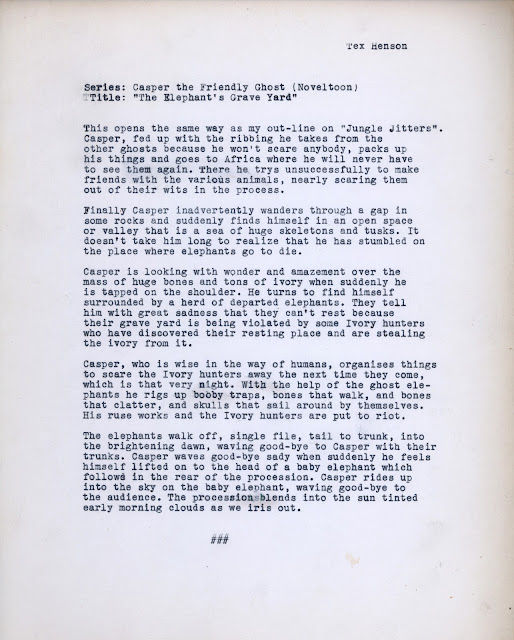 The ‘story idea’ and drawings below for Minnie the Mermaid are by Larz Bourne, long time member of the Famous Studios story department. After leaving Famous Studios he worked for Hanna Barbera and DePatie-Freleng. During this later part of his career he worked on stories for many different characters, including work on the 1979 made for TV Casper Halloween Special. 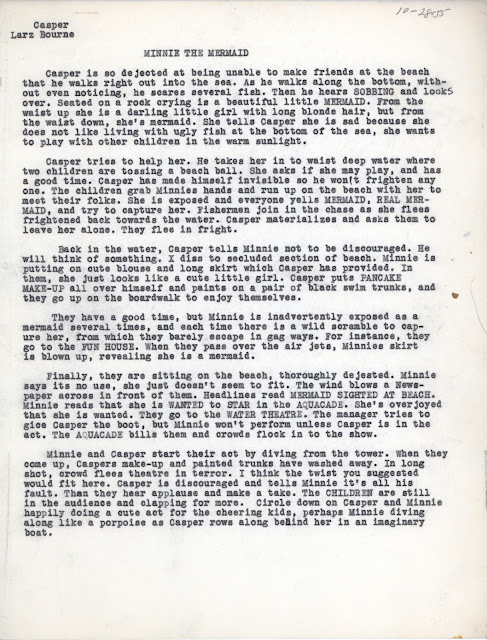 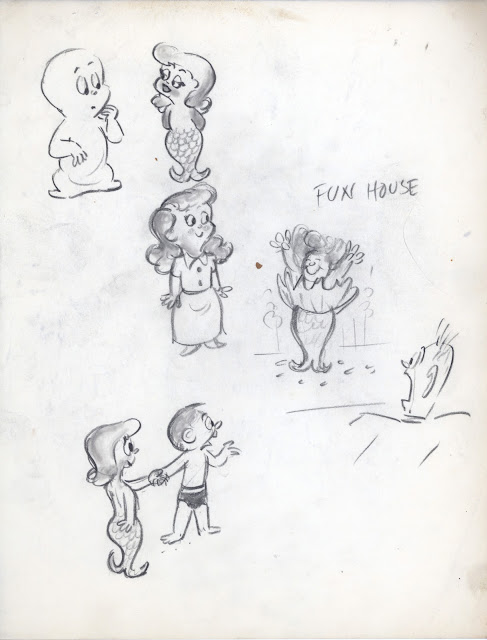 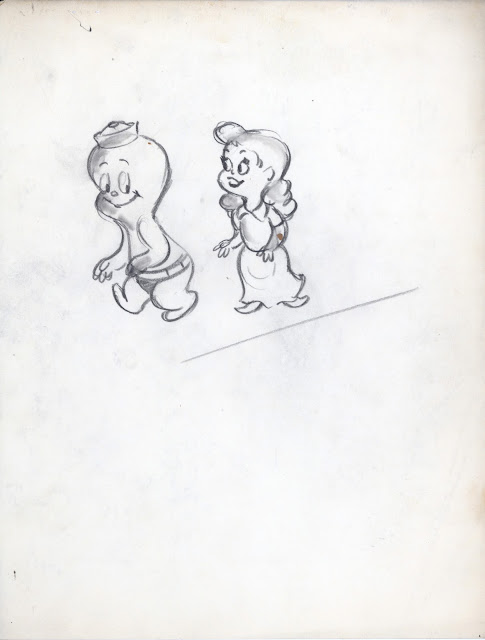 The next story is Boo Bop by ‘Mike.’ Does anyone know Mike’s last name?… (Thank you everyone who commented and identified "Mike" as Carl "Mike" Myer... now he can have proper credit for this clever story idea that actually ended up in production!) 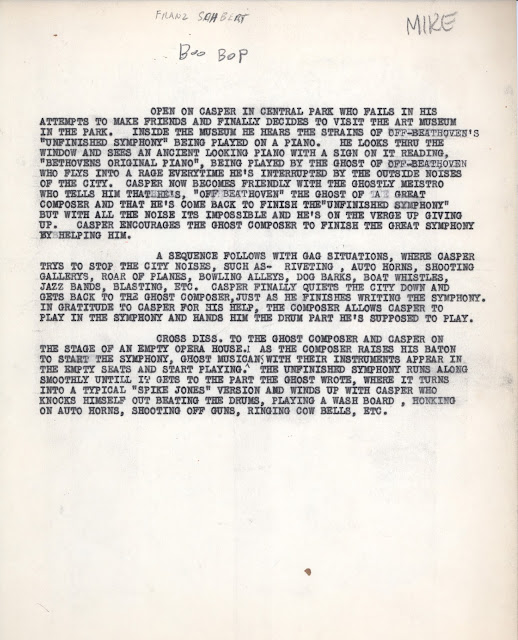 You can find the film Boo Bop, online to watch --- http://www.youtube.com/watch?v=vbDqon8-804 the story is different from other Casper films… and it’s definitely worth watching. It's clearly based on this story idea. It was produced in 1957 to play in theaters. When Harvey created the TV show Matty’s Funday Funnies, this film appears to have aired on that show along with many other Famous Studios films (Herman and Katnip, Little Audrey, etc.). If you watch this film online you’ll notice the original credits are missing. When the Harveys purchased rights to these characters and films the original credits were replaced with their own opening image. Thanks to Big Cartoon Database I can share with you the missing credits for the Casper film Boo-Bop.


In this case it appears that 'Mike,' who wrote the story idea, is also the one who wrote the final version used in production, and he was properly credited as Carl ("Mike") Meyer.

Here’s some more story ideas that were submitted by Studio staff for Casper films. I thought these really good examples of how ideas could be submitted in any form--- they didn’t need to be anything fancy… like typed! Also, they're fun to read since you can really hear the voice of the writer. 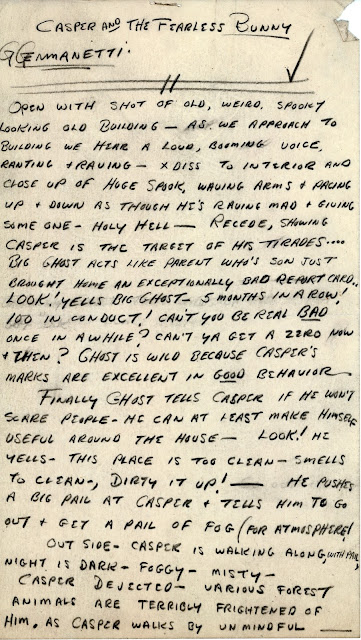 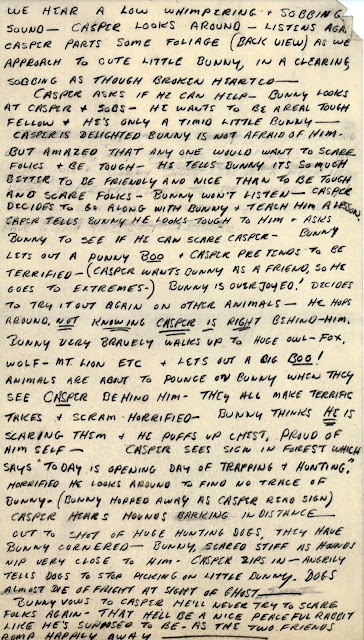 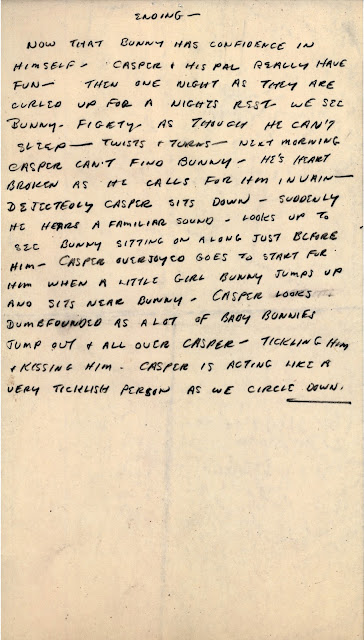 Here’s a story idea below by Myron Waldman, another long time Fleischer and Famous Studios animator. Myron likely held the record for having worked on the most Betty Boop cartoons and was responsible for animating many Casper films as well. 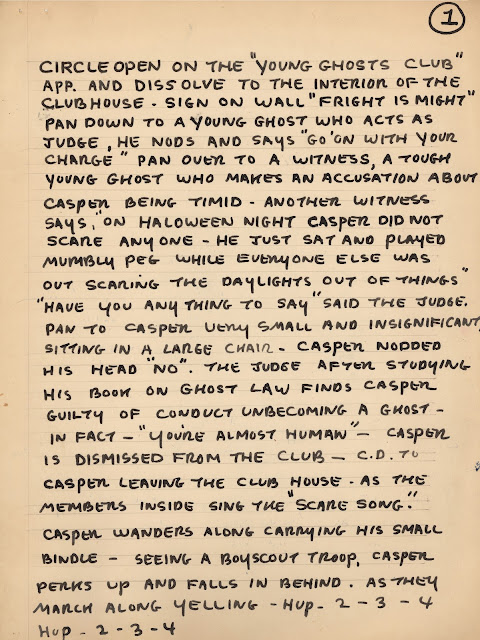 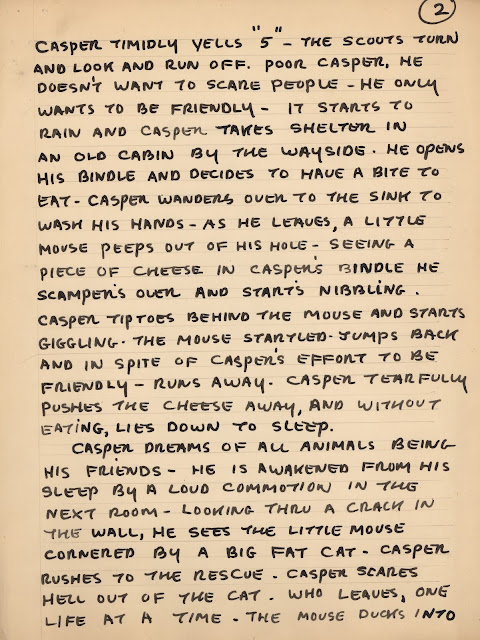 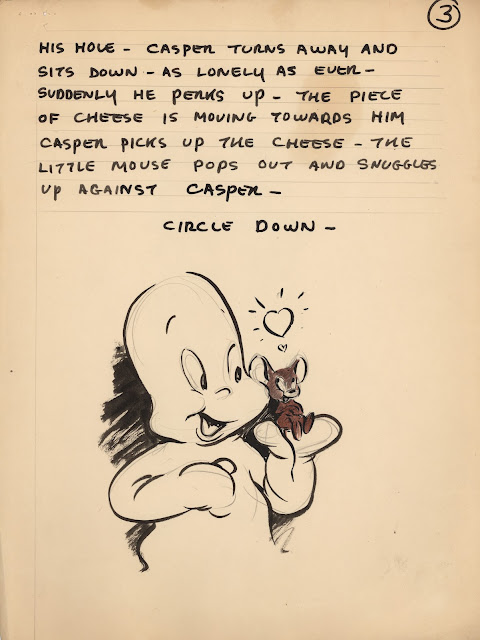 The story idea below was submitted by Jack Mercer—who  though he submitted many story ideas and was also an assistant animator, is best remembered as the voice of Popeye. 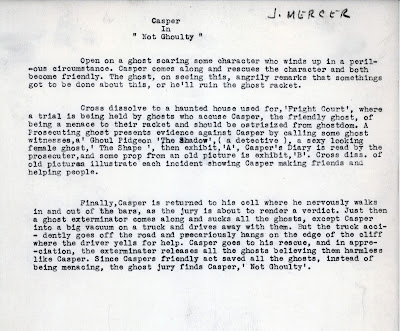 If you think the story idea below looks a bit more ‘professional’- it’s because the writer, Larz Bourne, was actually a member of the story department! 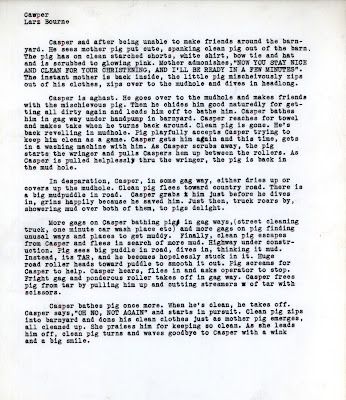 I love these story ideas because they show how staffers in the 30’s and 40’s could choose to be involved in many aspects of a film... from start to finish!

Ginny Mahoney
Blogs I follow and create cover a variety of interests... animation history and art, plus one to follow for a special amazing little lady, Noa.